GENERATION Y: The Employee with the Dragon Tattoo

When I have the rare opportunity to communicate face-to-face with an adult (other than my husband) during the week, it is usually with a Gen Y mom. Our children are playmates, even though I had mine at 40 and they had theirs at 20. We have great conversations and always support and learn from each other. Quite frequently our conversations (social media and texting) inspire my blog posts.

Friend A: I'm finally going to do it! Does anyone know of a good tattoo place that's not crazy expensive? This will theoretically be on me forever, so I really want someone that's good, but I'm also not loaded.

There were 53 responses to her post. Here is a small sampling:

·         X is good however last time I went in there they treated me horribly and refused to give me what I wanted. So I went right down the road to their competitor and they gave me exactly what I wanted for a great price!!!

·         What are you getting? X and I were just talking about getting bird tattoos!

·         I have seen some beautiful white ink tattoos on pinterest!  However, if you plan on it being a conversation piece that might not be the best way to go.

I love the power of social media and the transparency of Gen Y! Yes, the customer experience impacts all businesses—including tattoo shops. 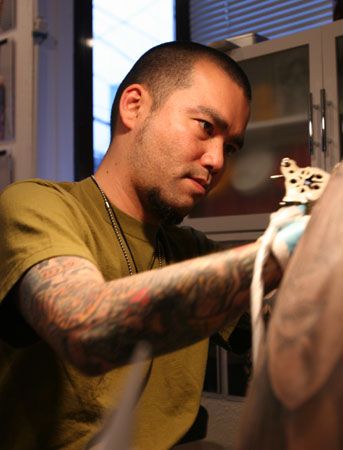 When I was in school, the kids with the tattoos were always the “bad kids.” You know the type—the ones that were always getting into fights and smoking those funny cigarettes—the type I often dated. J

My parents always told me, “Don’t judge a book by its cover,” and I believe this is a very important message for those leading today’s workforce. A tattoo does not alter an employee’s ability to be successful, respectful, kind, or productive. In fact, some of the best employees I ever worked with had multiple tattoos hidden under their business clothes or bandaids.

Almost 40% of all Gen Y (80+ million) have a tattoo (about 50% of those with tattoos have two to five tattoos and 18% have six or more). 70% say their tattoos are hidden beneath clothing. Pew Research Center 2010 Report

Yes, Baby Boomers, it appears that your distaste for tattoos had no real effect on your children’s love and obsession with them. The good news is that they are wise enough to know that if they want a professional job, they have to make an effort to hide their tattoos and comply with the dress code policies. But, I wonder if this is temporary?

·         As Baby Boomers retire and the workplace begins to shift, will this be one of those policies that the younger  executives toss out along with the leather chair and big corner office?

·         Will there be a time when visible tattoos are more acceptable in the professional workplace?

As I began to Google for answers, I came across a great post by Lucas Meek in The Orion, an independent, student-run weekly newspaper at California State University. Clearly, a member of Gen Y, Lucas gets right to the point with this article that is directed at his dad, an anti-tattoo Baby Boomer,

“But eventually these old-school bosses will retire, and if the number of people with tattoos continues to grow at the rate it is now, jobs will have to be given to people with body art.”

Get to the Core: Tattoos no longer taboo in professional workplace-Lucas Meek

The attitude of Gen Y about tattoos is completely different than that of their parent’s generation. While the friends that I grew up with might have done it on a dare, few would have viewed it as something that made them more attractive—an outward expression of themselves.

Generation Y isn’t concerned with the long-term consequences of covering their bodies with tattoos, piercing their eye brow or placing a gauge in their ear. They are not weird—you are for being intolerant.

If Gen Y is the future—renter, leader, and employee—will it really matter if their tattoos are visible? Who will care?

What will your workplace dress code look like in the year 2020?
Things that make you go hmmm…

I would love to hear your thoughts!