Major League Baseball players make millions per year.  But for those in the minors, at least relative to their big league counterparts, they essentially get scraps, earning only between $12,000 and $16,800 per season.  This week, MLB announced a change that could possibly impact multifamily housing providers!

MLB owners have now agreed to provide housing for nearly all minor league players, with the only exceptions being those that already have major league contracts or those that make above $100,000.  Obviously, this might be a good time to do outreach marketing, but even beyond that was how interesting it might be to be the “official housing provider” of that team!

There are currently 120 minor league teams, many of which in smaller markets where ad dollars might go farther.  From a housing needs perspective, each team has between 28 and 35 players.  The news is sparse, but here is what we have so far: 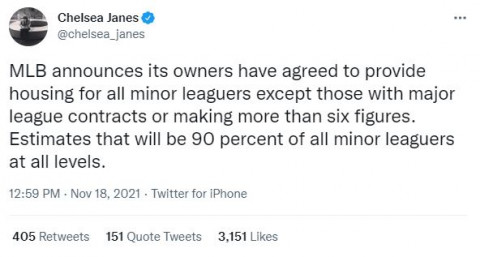 What do you all think?  Any other interesting ways to take advantage of this new information?

Depending on costs and contracts this could be a great opportunity. The White Caps are super popular in West Michigan!

This is a great article! I'm a vendor in the Multi-Family industry and help a lot of minor league players, coaches and staff with their short- term furnished housing needs by assisting with furniture rental here is CA. The trouble is that a lot of communities are not offering short term leases since COVID. I ❤LOVE❤ helping all my sports team every year and hope to help them again this year!

Karie Talke
There are no comments posted here yet